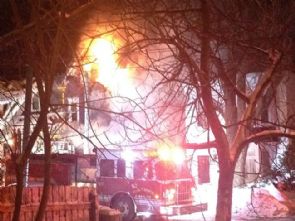 A late-night fire on Patrick Street in St. John’s sent one man to hospital and has left the occupants homeless. Crews responded to the blaze around 12:15 a.m. Neighbours described seeing a ball of fire coming from the top floor of the three-storey structure. The home was attached on one side, but luckily for neighbours the fire didn’t spread to the adjoining homes, although three homes were temporarily evacuated as a precaution.

There was only one person home at the time. He left the scene to be treated for smoke inhalation.

Meanwhile, the investigation continues into a fire which broke out just before lunchtime yesterday in the centre of St.John’s and left a couple of people homeless. Number 12 Spencer Street incurred smoke and water damage but the adjoining property was spared, though the occupants were evacuated as a precautionary measure.

Captain Craig Cox of the St. John’s Regional Fire Department says they had things under control within a short time, and that there were no injuries. The house affected yesterday is almost a block away from a house which has been struck by fire on a couple of occasions over the past few months.

And a fire on Durham Street just off Blackmarsh Road in west-end St. John’s also sent a person to hospital for treatment. Byrne says it has been a very busy time for firerefighters in metro.

That home was extensively damaged and the cause is still under investigation.